Chris Dorsey has been a friend of ours since the idea of Sea-Run first began to take shape. Chris has been a major supporter and ambassador for our sister brand, Negrini Cases, which he uses to transport his hunting gear as he travels the globe in search of big game and fly fishing adventures. As we began designing the first prototypes of what would become our best-selling cases, Chris was deeply involved, testing and offering key feedback around the design of the interior and exterior of the Sea Run. Since Chris has taken his case all over the world, from the Amazon River to the Alaskan backcountry. We sat down with Chris to pick his brain about our products and to catch up on his latest adventures! 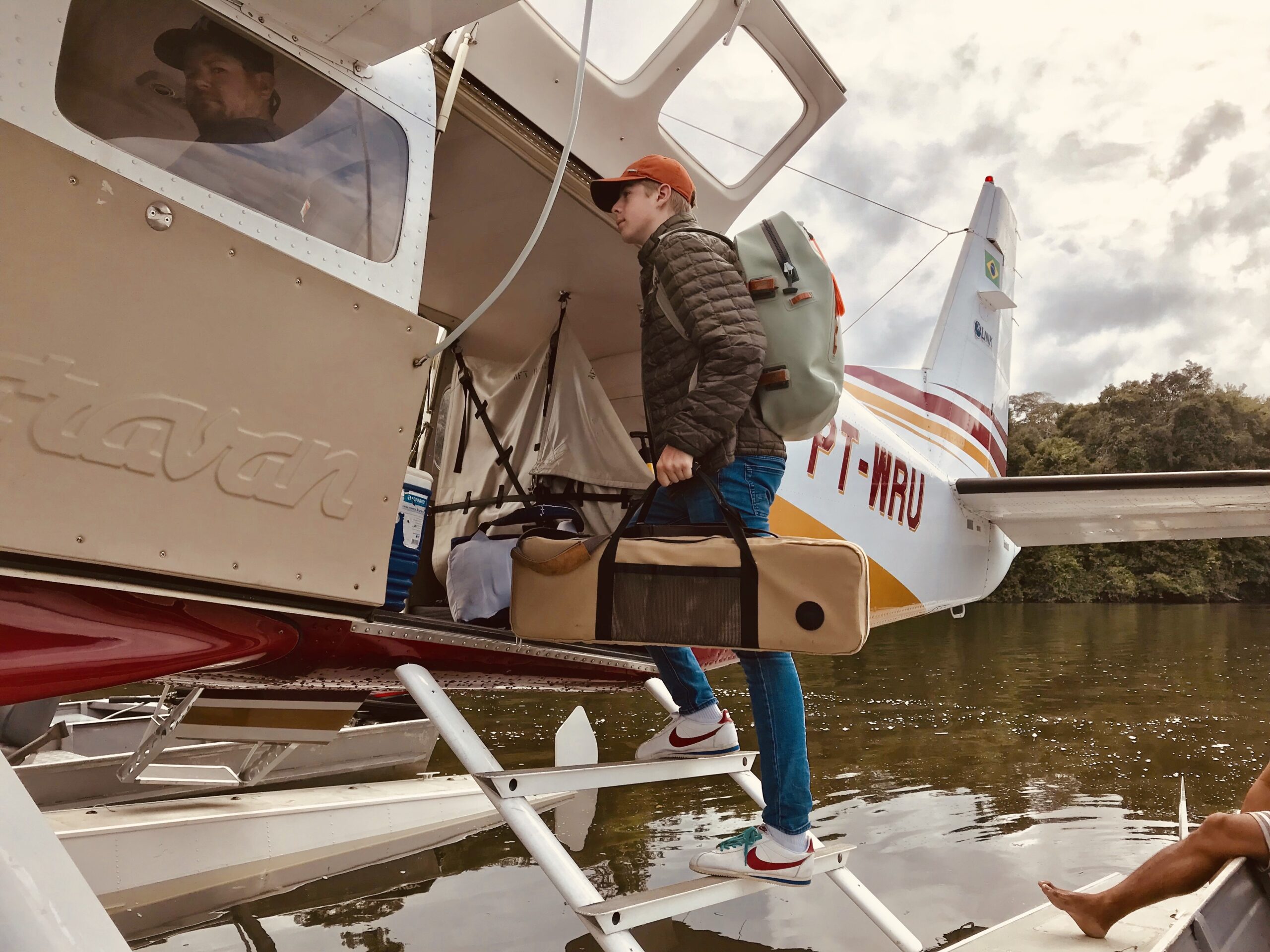 Sea Run: How did you first hear about and get involved with Sea Run?

Chris: Well, it really kind of goes back to the Negrini days. Obviously, known about Negrini for a long, long time. Steve Lamboy’s an old friend. I’ve known Steve for a long, long time, and Negrini cases, obviously, are top of the line. When he suggested they were going to do something in the fly fishing space, I said, “Well, hallelujah, it’s overdue.”

We were just having a conversation about how to really transform the big game gun case market as well. I just got back from Africa a couple of days ago, and I mean, it was a plane full of big game hunters and their cases are these bulky metal, half of them had a broken wheel and it’s like, “Where are the Negrini cases?” Negrini’s are super tough, super light, and it’s just a godsend when you travel. 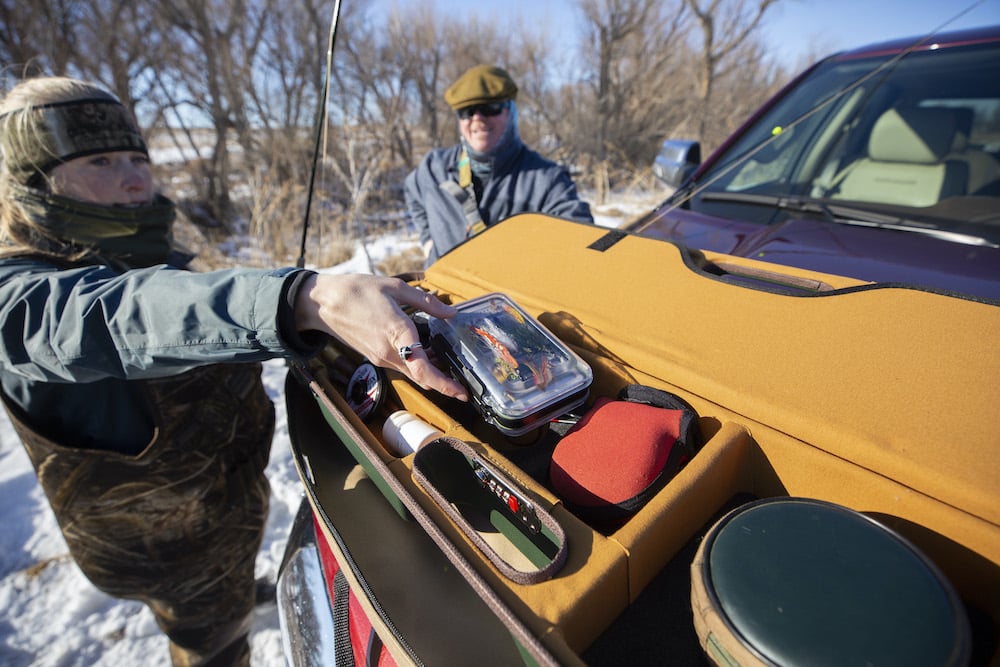 Sea Run: Were you involved with them at all in the initial design run with the Sea Run cases?

Chris: Steve brought a prototype out to Nebraska. It was actually a bird hunt that we were doing and the guy said, “Look, we’ve got this really cool little trout stream. I know you’re not going to believe it, but it really is a great little trout stream.”

We brought the prototype out. We had a video team. We had a still photographer out there so we got a lot of images. It was little cold fishing, but we caught a bunch of these little trout and in a really intimate river and in a place that no one would think there’d even be trout, to begin with. 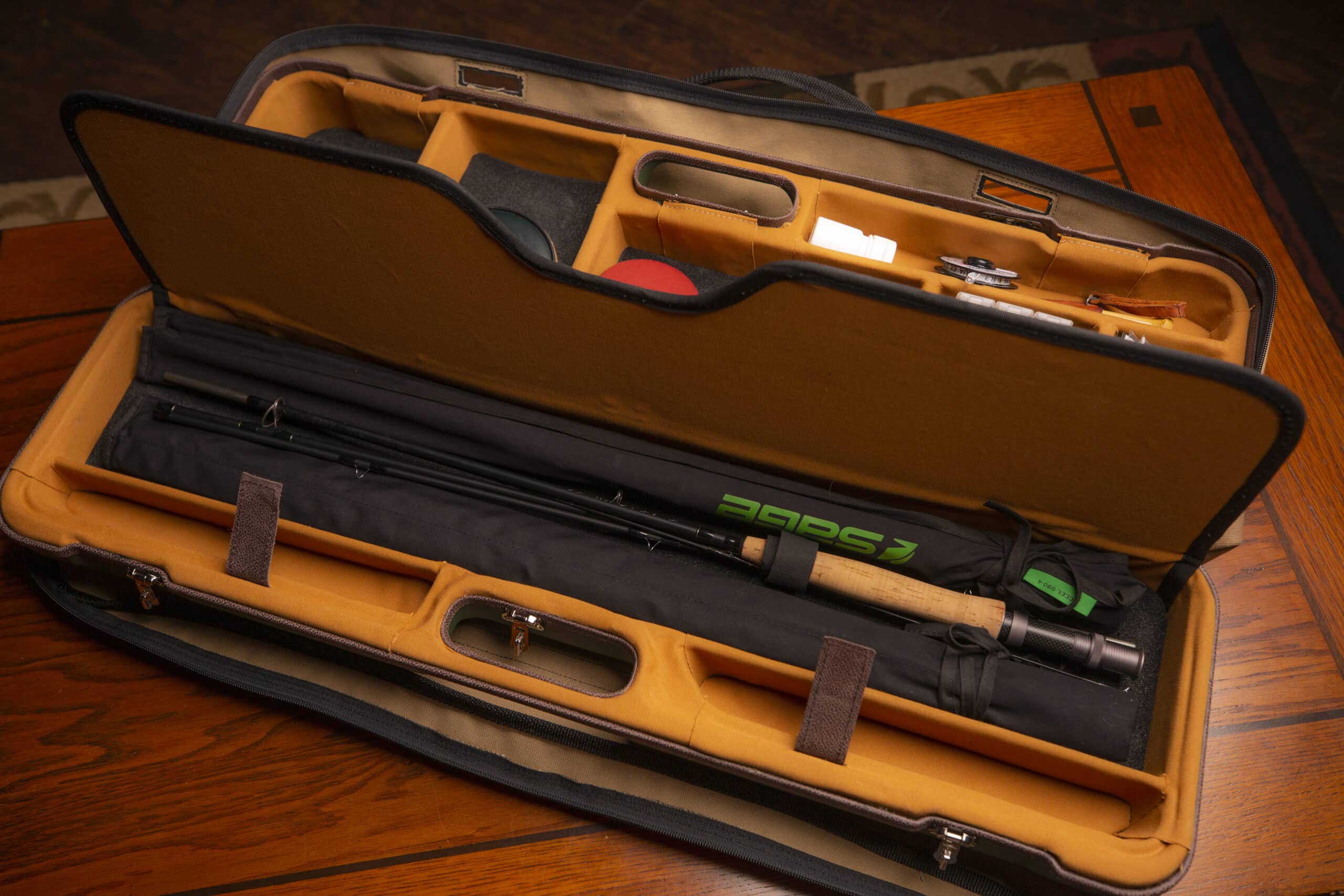 Sea Run: Now that you have had the final product in your hand, what are your favorite features of the design?

Chris: Well to me, it’s the whole package in one case, right? You’ve got it all there. It’s just the right size to carry everything needed for an expeditionary fishing trip, which we do a fair amount of.

We took the family down to the Amazon. Took the Sea Run down there and, of course, shot a bunch of still photography down there. I wrote a column for Forbes about the experience. Basically, all the fly rods and equipment that we needed for that Amazon experience for four anglers were put into one case. The cases are great, you can carry them on or check them.

For instance, my son is a fanatical fly fisherman. He ties his own flies and has for a long time. He’s 16 years old and he didn’t let that case out of his sight the entire trip. The fact that it fits in the overhead works to the advantage of the anxious expeditionary angler. 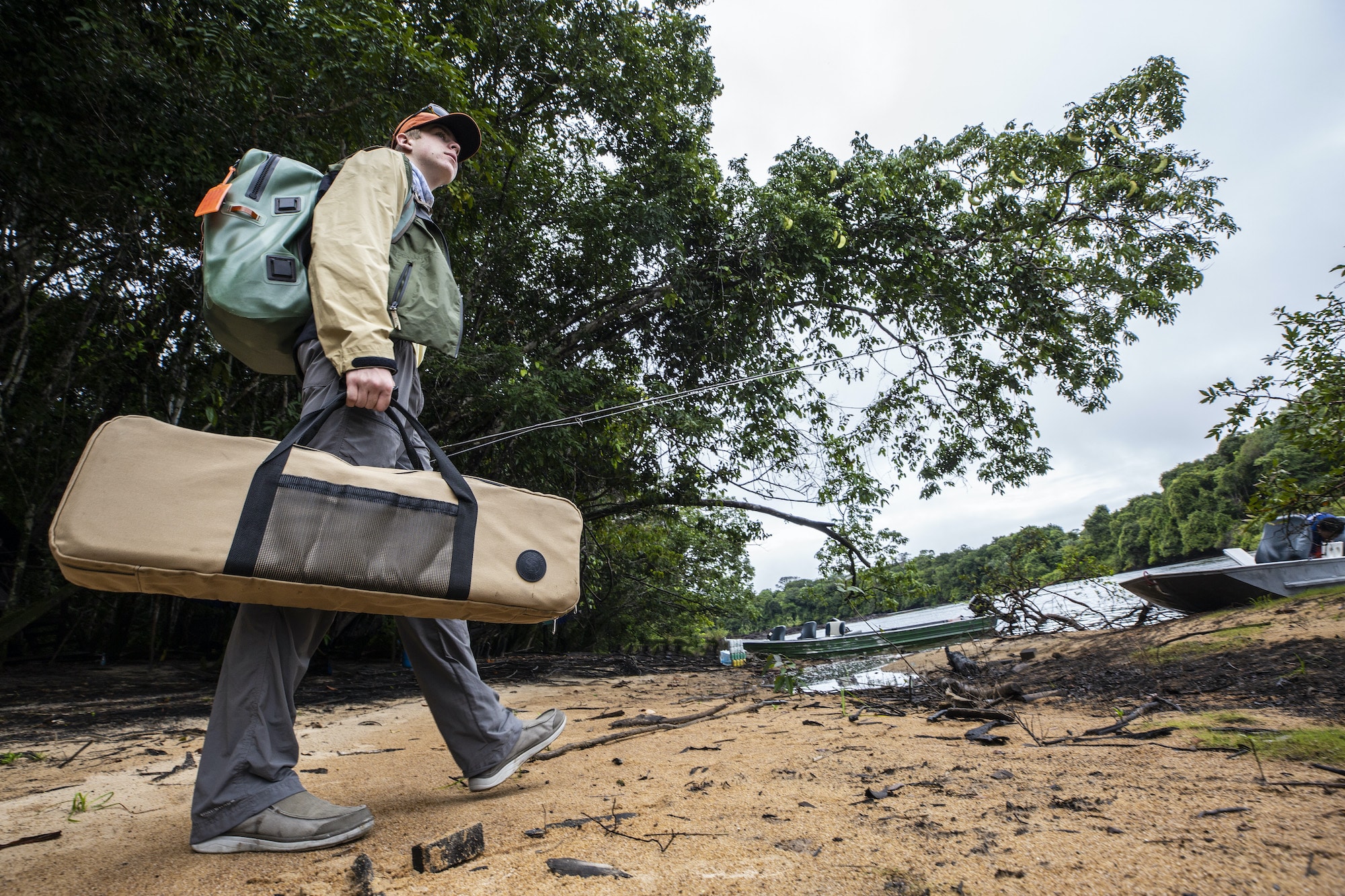 Sea Run: Speaking of destinations, what adventures have you brought the case on? What was your experience like checking it?

I said, “Buddy, you could just carry the flies on and check the rods.”

We’ve taken the case to Alaska. I’ve checked it to Alaska, fishing at Crystal Creek Lodge up there. Dan Michaels is an old friend. We’ve got trips booked to Bolivia now for big golden dorado up in the mountains at Untamed Angling’s Tsimane Lodge. I’ve also got a group of 10 anglers going up to Bristol Bay Lodge in September, this September, as well. On all these adventures packing my Sea Run is as automatic as bringing a fly rod.

Quite frankly, if you’re going to put your gear in something while traveling, it has to be a Sea Run. 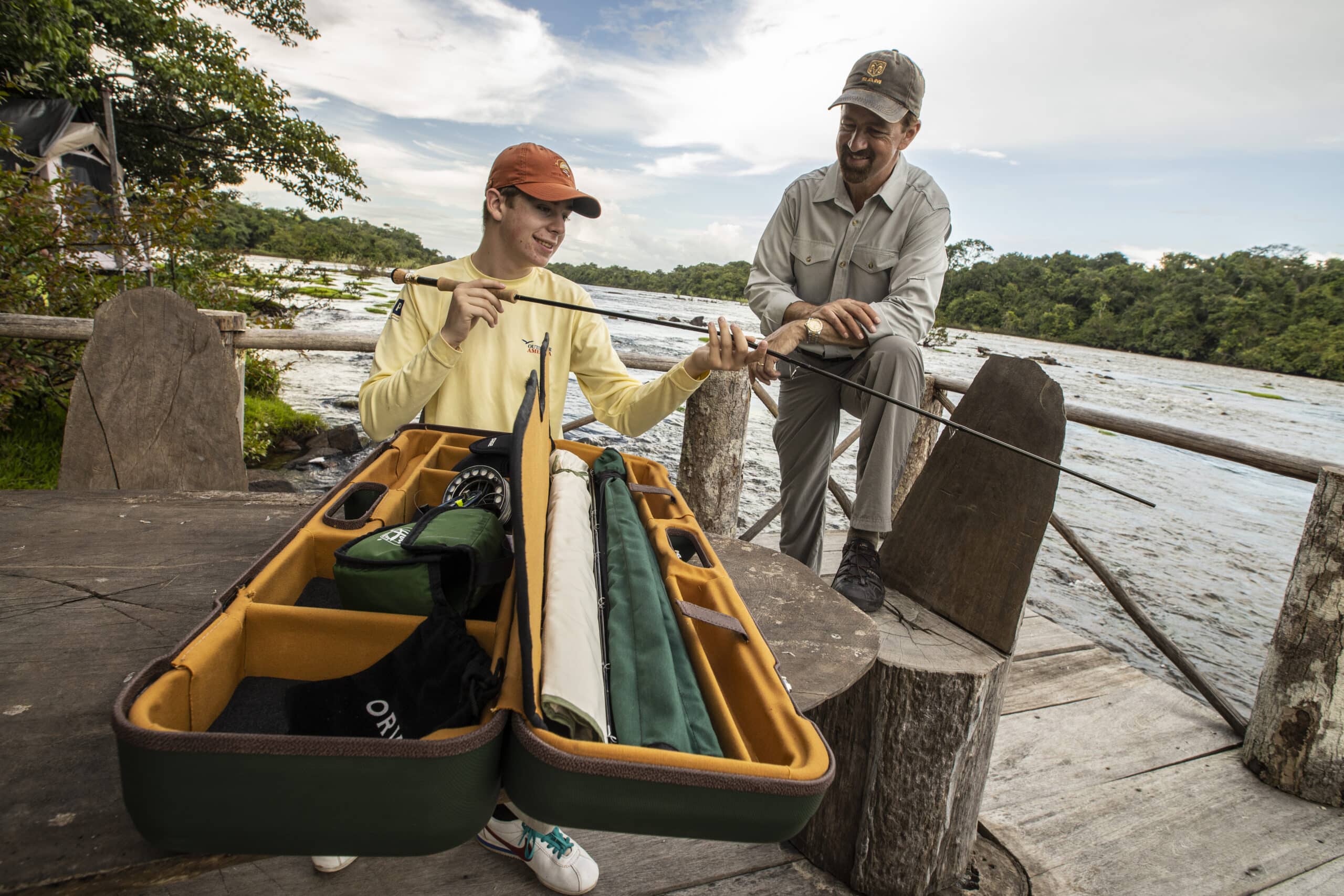 Sea Run: What has been the reaction of other anglers or the outfitters when you arrive there? Has anybody remarked upon the case?

Chris: Oh yeah, everybody does. Almost right away they say, “Is that a new fly rod case?” Quickly followed by, “Is that a Negrini?”

And I say, “Yes, but it’s built for fly rods. I love them for my shotguns, but I travel all the time to fly fish, and I need the same thing for my fly rods.”

The overlap is interesting in the shotgun market. There are a lot of bird hunters out there that love to fly fish. There’s just a great overlap. To me, it’s kind of a very natural progression to go from knowing and loving a Negrini gun case to do the same with a Sea Run.

When you understand the maker is the same. It’s kind of a natural step. They drank the first Kool-Aid with the Negrini gun cases, and now it’s very easy to make a decision to get a Sea Run.

Serious anglers know that. They look at it right away and go, “Wow, this thing is bulletproof.” As opposed to, here’s kind of a convenient case, that’s kind of squishy and you might carry it on, but you’re certainly not going to check it. Whereas, with Sea Run, you can feel very comfortable checking it on your next flight.

Sea Run: Which of your next adventures are you most excited to take your Sea Run on?

Chris: The Bolivian trip just looks pretty incredible, huge dorado and gin clear water, sight casting in a completely wild jungle environment. With a little lodge that’s not exactly roughing it, and a group of friends should be pretty dreamy too.

You can follow all of Chris Dorsey’s sporting adventures on Sporting Classics TV on the Outdoor Channel and on Instagram @SportingClassicsDaily!

The next evolution of fly fishing rod and reel travel cases. Sea Run fly fishing cases are the best choice hard-sided checkable luggage that gets you to your destination with peace of mind. TSA Compliant and airline approved for travel. Made in Italy!